In the centre of Lecce, a multidimensional space in which history, art and innovation interact.

Palazzo Vernazza is a jewel of Lecce Renaissance architecture that preserves thousands of years of history within its foundations; evidence from the precious archaeological finds that tell of the occupation of the site since the Iron Age. Among the oldest noble palaces of the capital of Salento (its tower dates back to the end of the 15th century AD), the building is owned by the Fondazione Casa Bianca, a non-profit committed to the social and cultural development of the area. Since 2011, the Foundation has opened its doors to revitalise the link between Palazzo Vernazza and the city of Lecce, showcasing it – at the end of a long restoration project – not only as a monument of cultural heritage to be protected and preserved, but also as a dedicated centre of innovation to the development of cross-media projects in the context of Culture 4.0. In fact, today the building is a multifunctional creative space that also houses the ITS Apulia Digital Maker – offering professional training in the ICT sector – in addition to Mediafarm.it with its entrepreneurial activities, which unite for a single mission: to innovatively enhance the promotion of historical and cultural heritage.

This jewel of Lecce’s Renaissance architecture is finally open to the public and offers an exciting tour to discover years of history kept in the basement of this noble palace, one of the oldest in Salento.

The architectural complex of Palazzo Vernazza-Castromediano is one of the oldest buildings in the historic centre of Lecce. Its original structure is dated between the end of the 15th century and the beginning of the 16th century.

A jewel of Lecce architecture

Palazzo Vernazza-Castromediano – named after the noble families who built it – is one of the oldest in Lecce (15th-16th century AD). There are no documented sources other than the exact year of construction or the names of the designers, as per most of the civil buildings of the Lecce Renaissance, but the watchtower (also called the Torre Signorile) dates back to the late fifteenth century. The Tower, about 20 meters high and spread over three floors, is the original nucleus of the building which over the centuries became what is one of the greatest examples of a fortified Lecce house ever developed, characterised by a refined elegance that still catches the eye of those who enter the courtyard after passing through the arch at number 8, of this small lane called Vico Vernazza.

Overlooking Piazza Pellegrino, the monumental complex is characterised by a modest façade in Lecce stone, dominated by the original articulation of the windows (straight and arched) and doors, adorned with precious decorative and architectural elements.  These features, dating back to different eras, tell the long history of this building which has been gradually expanded and enriched by the various noble families who have inhabited it over the centuries, until it was abandoned in the early 1970s.  Thanks to an important renovation over a period of seven years from 2011 and financed by the state as part of the Lecce Baroque law, this splendid space was returned to the community. 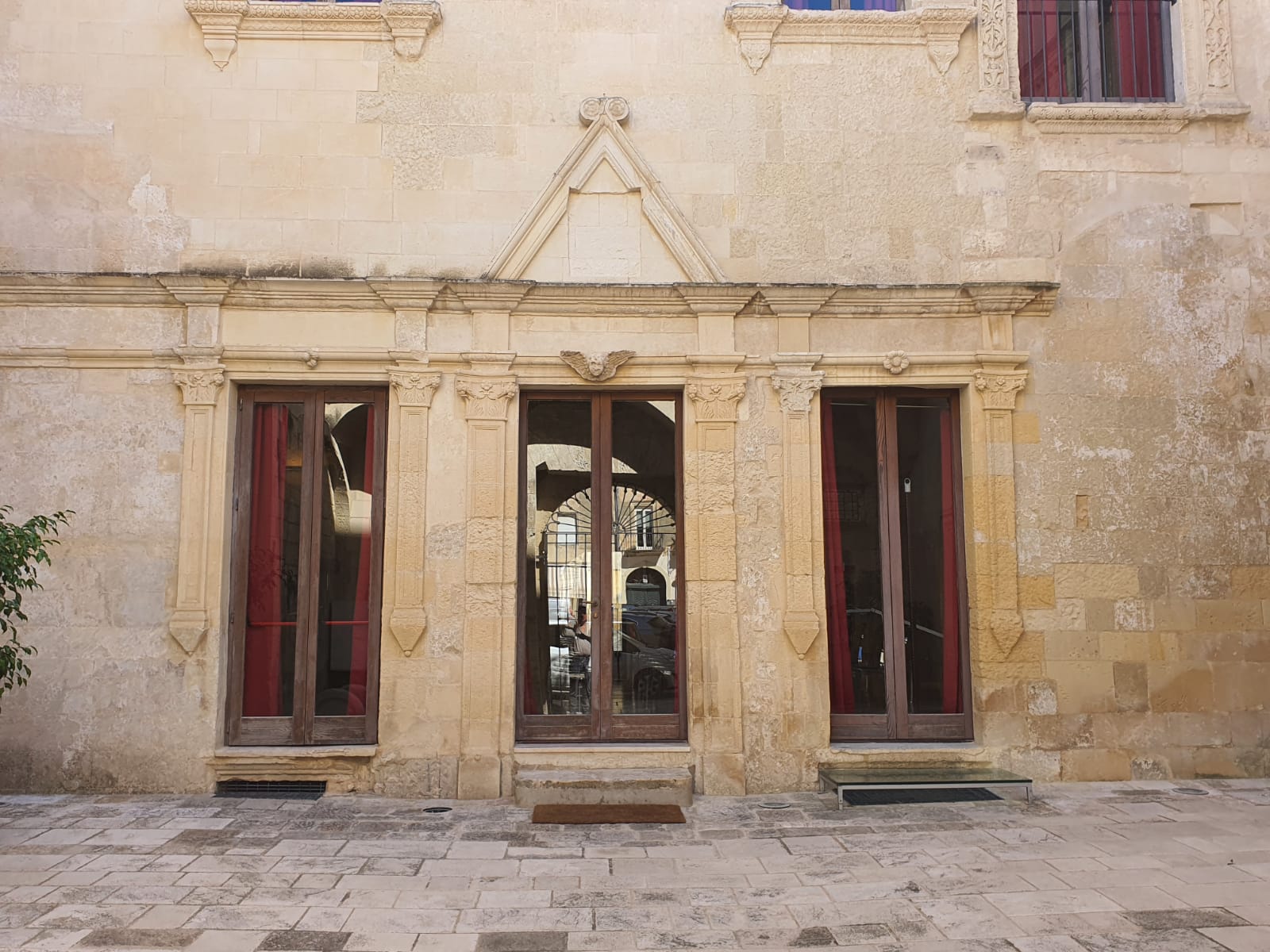 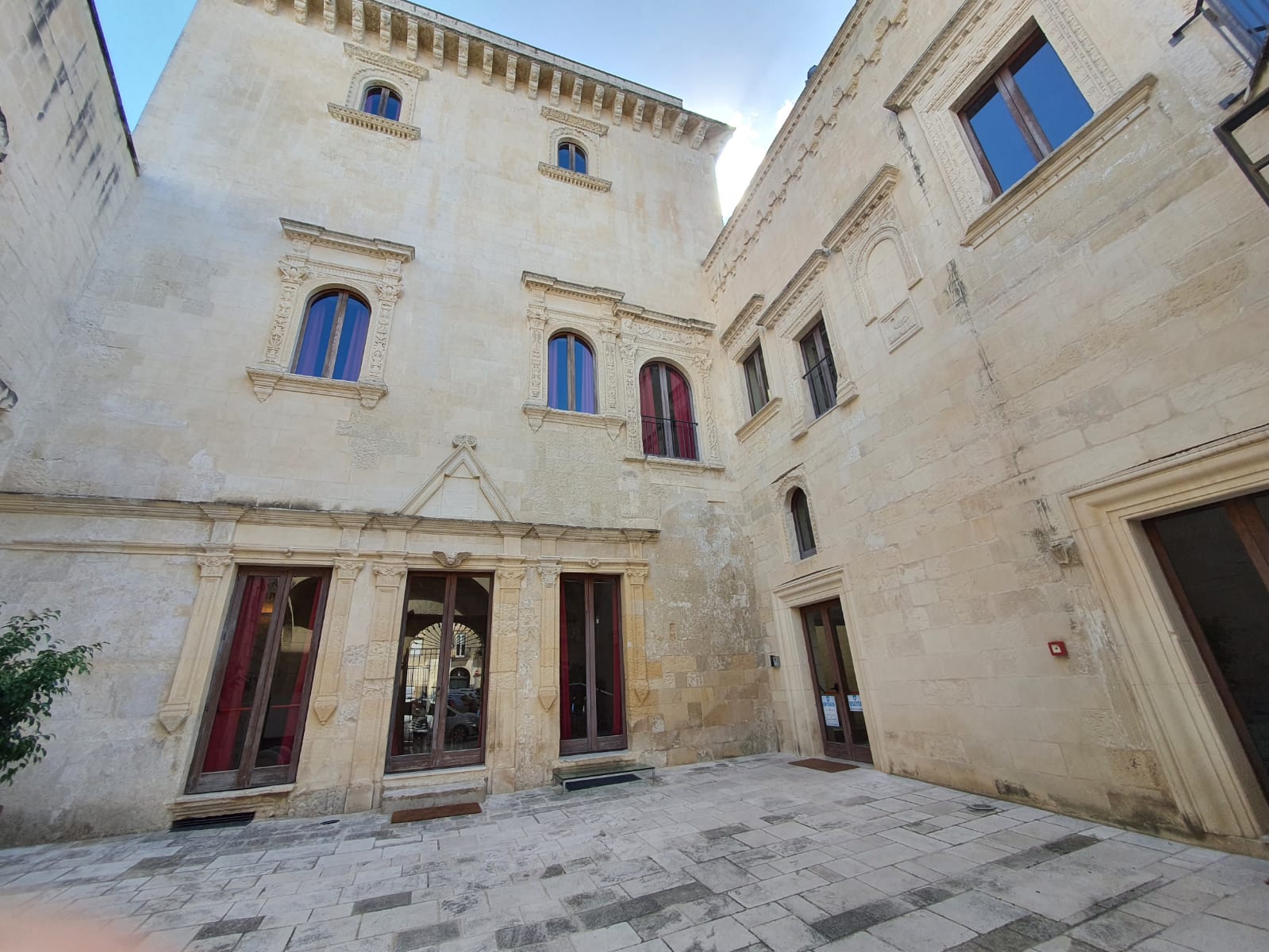 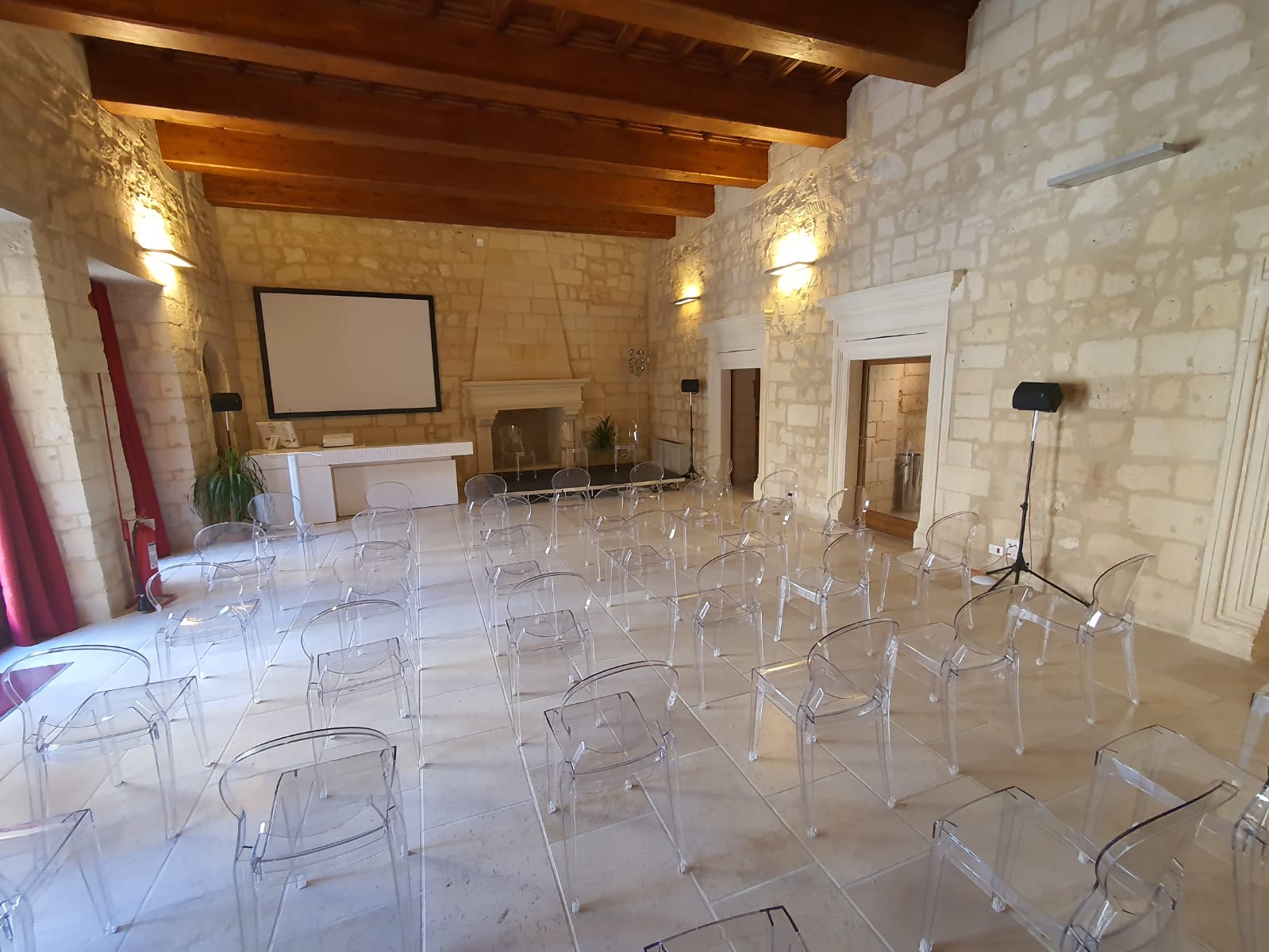 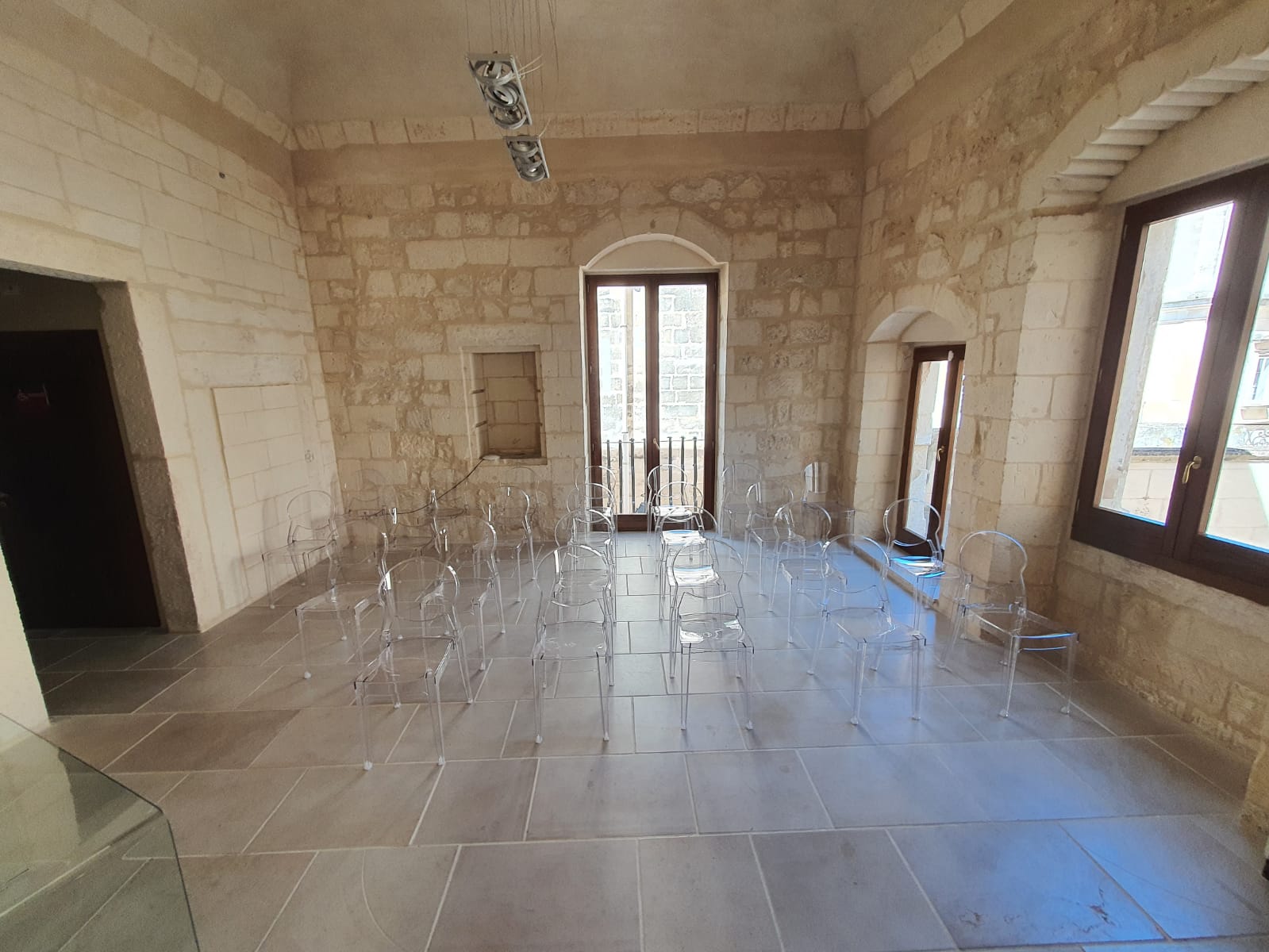 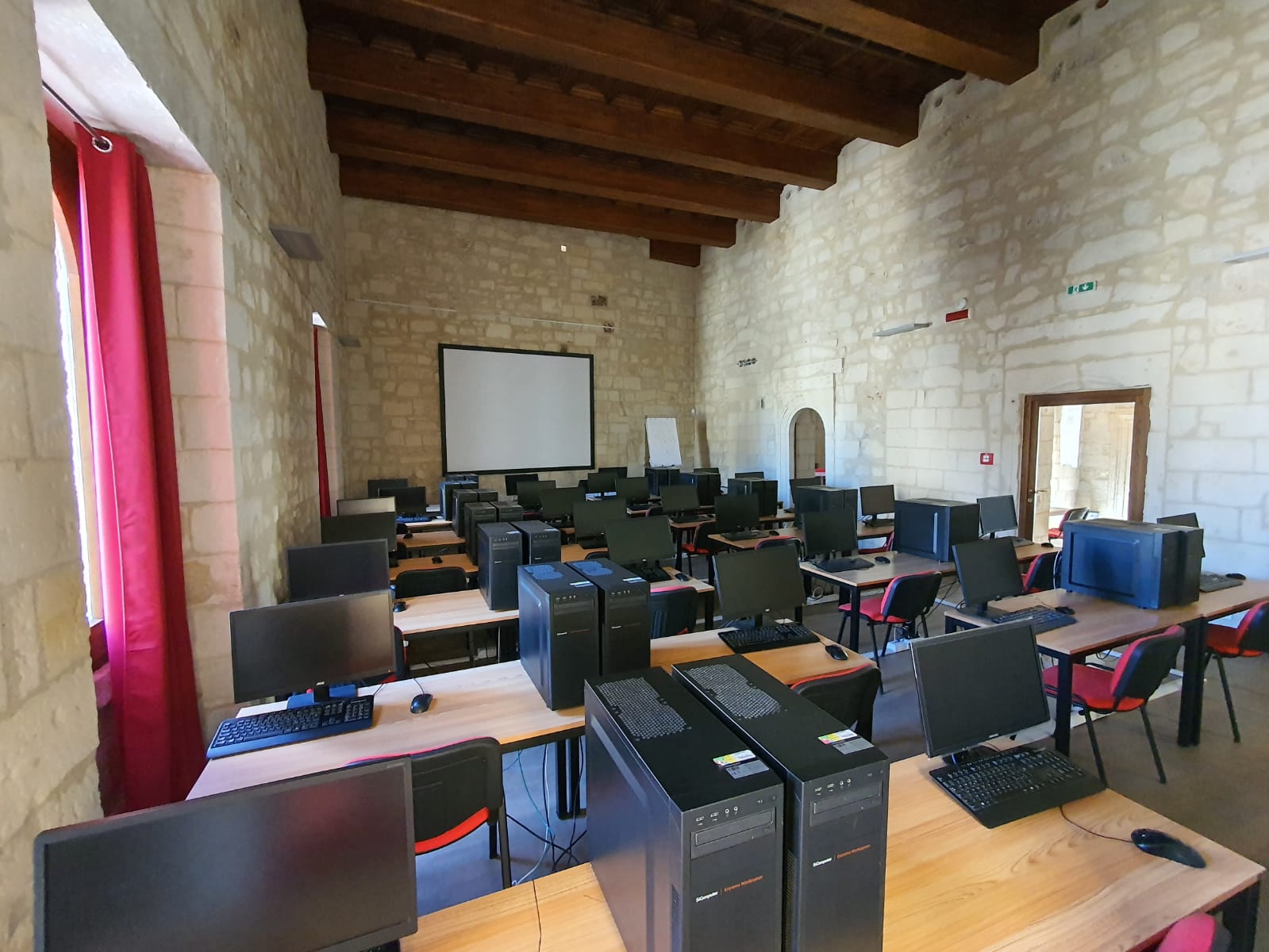 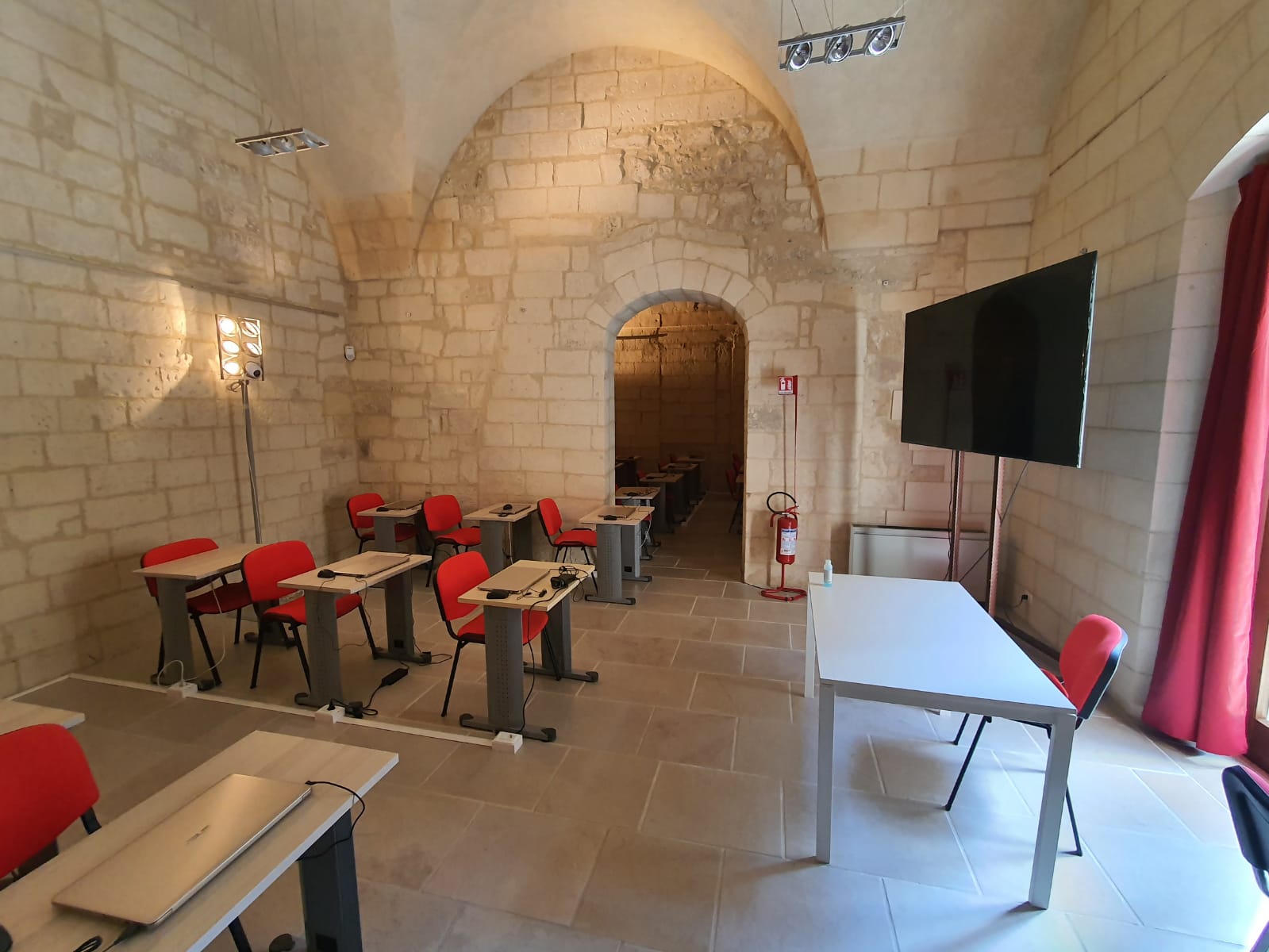 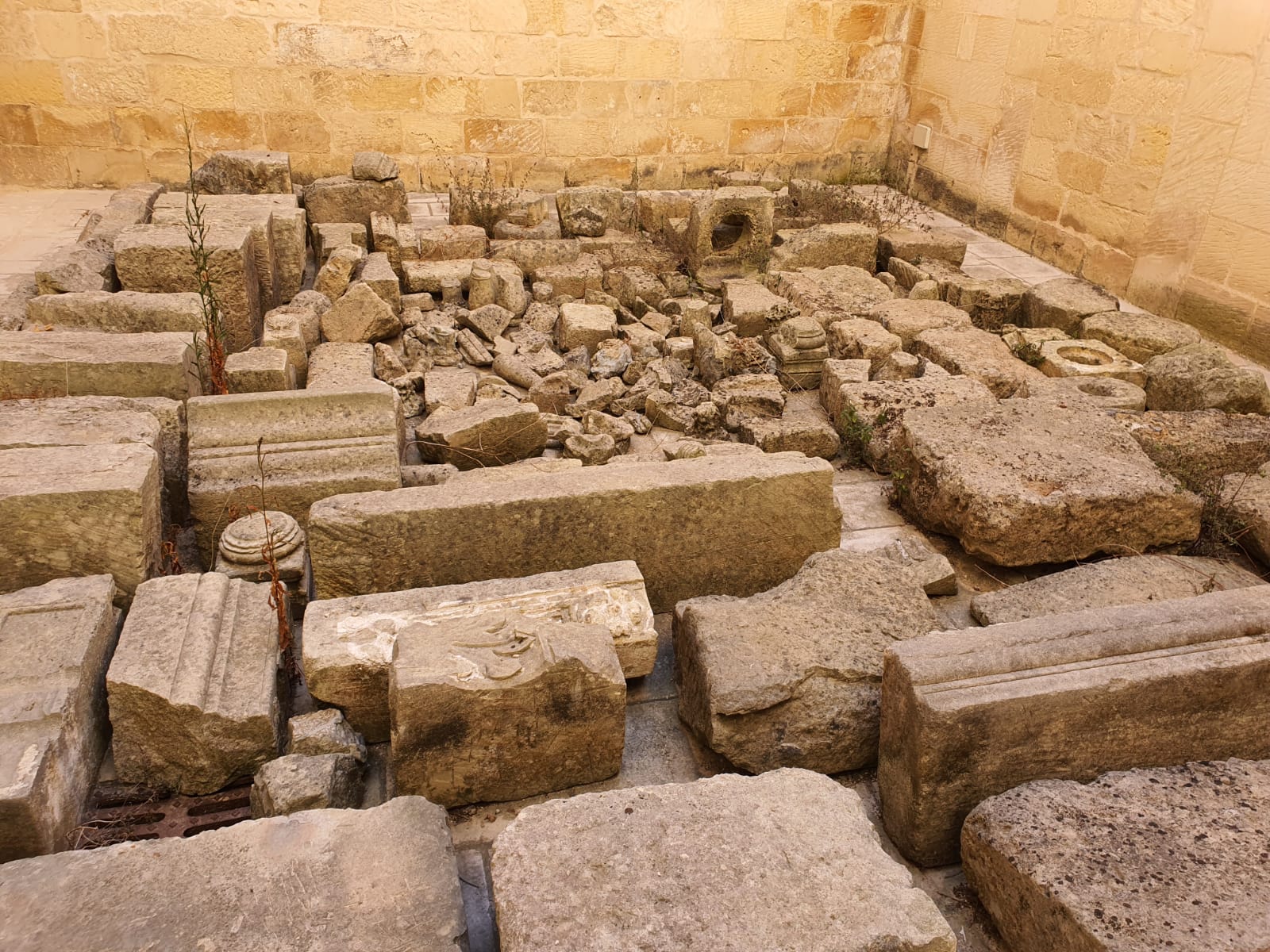 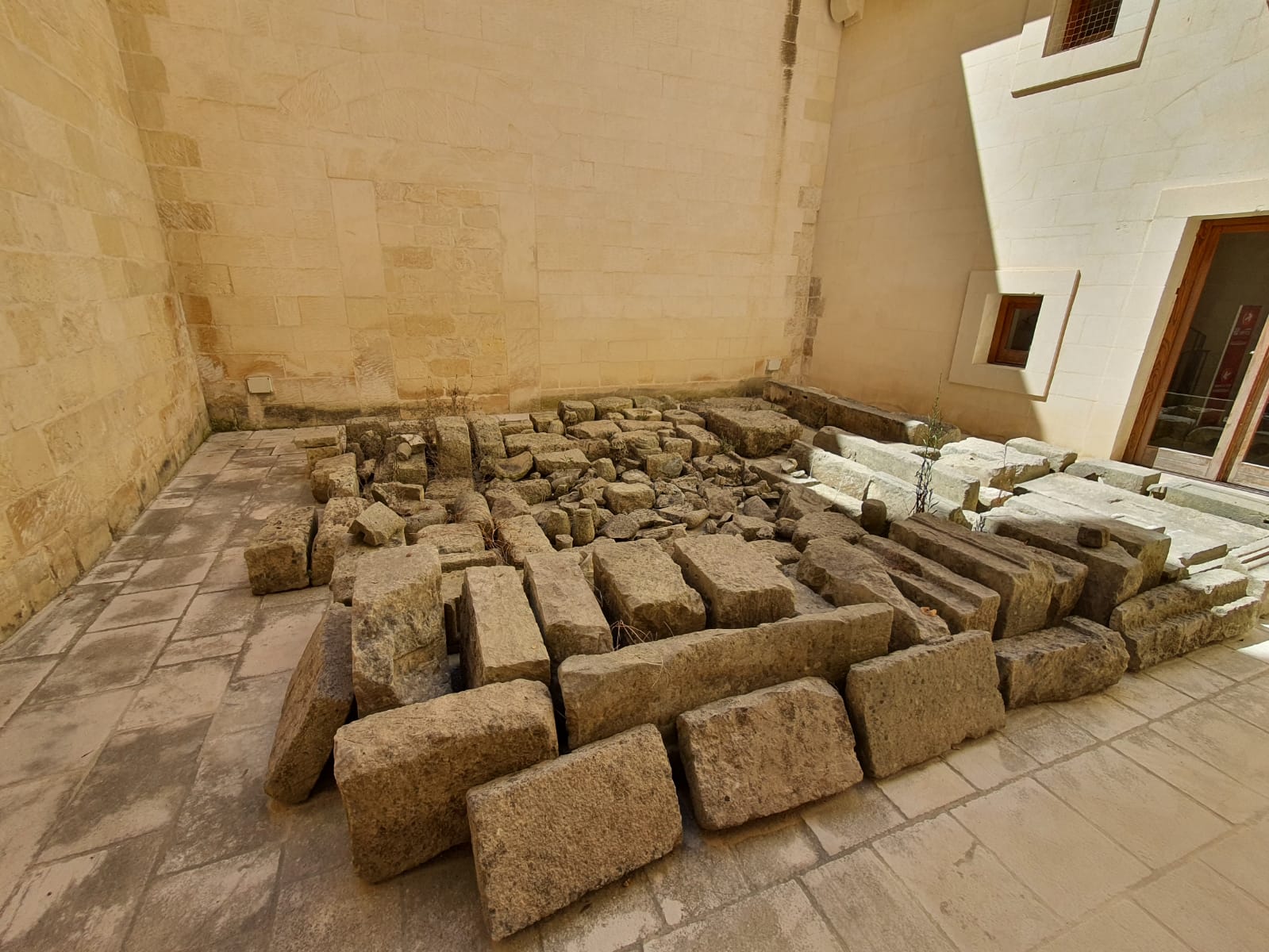 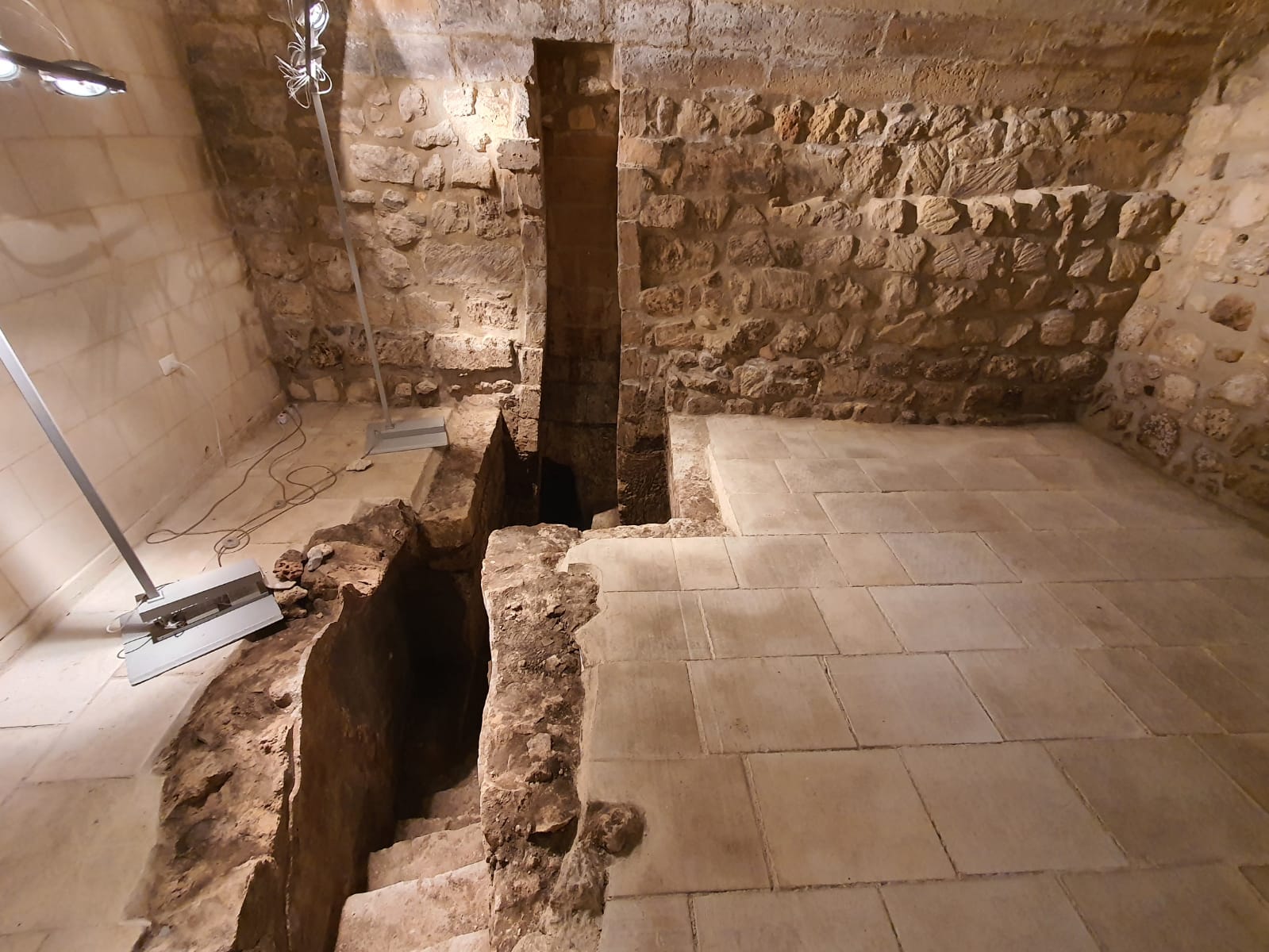 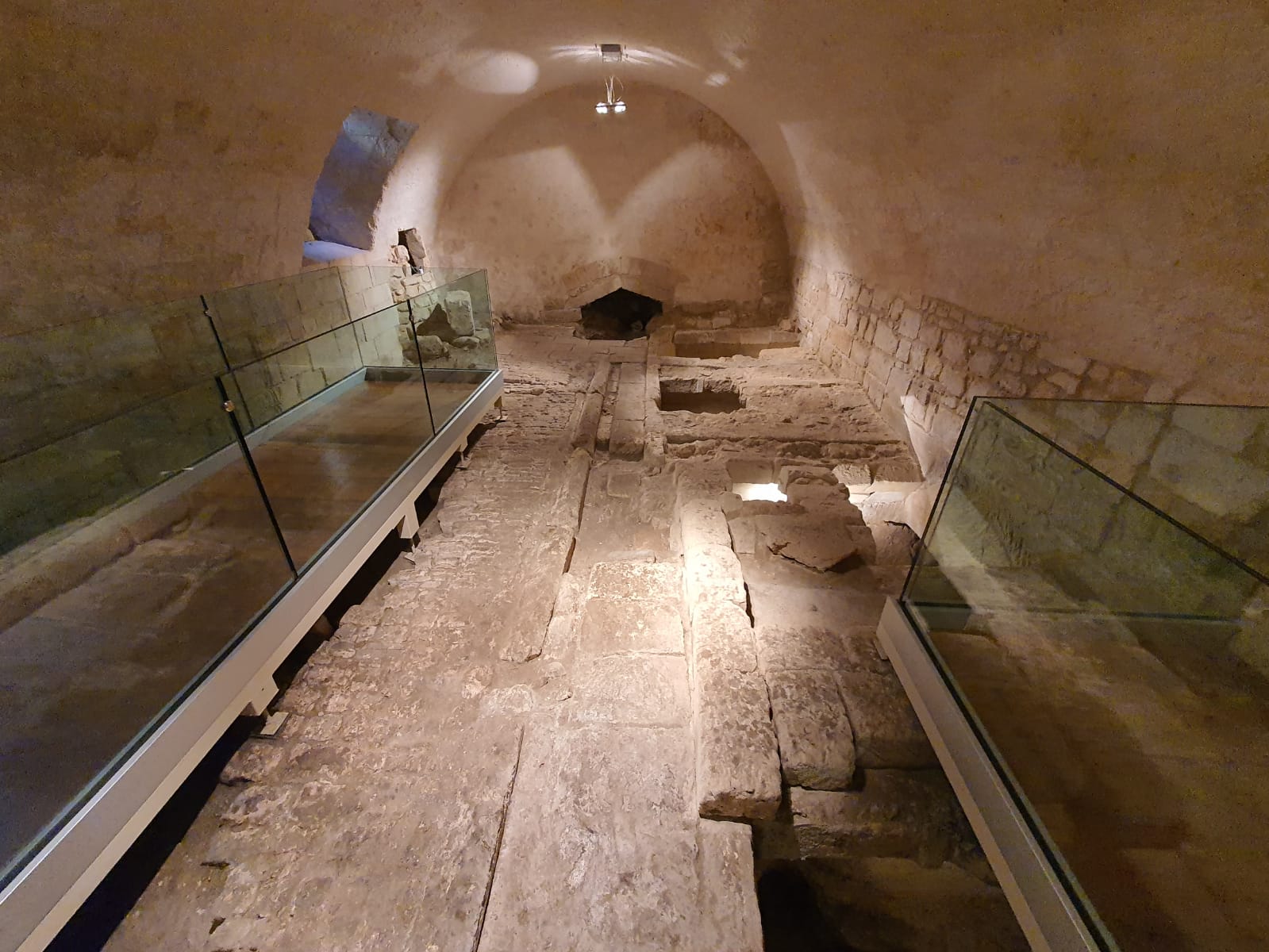 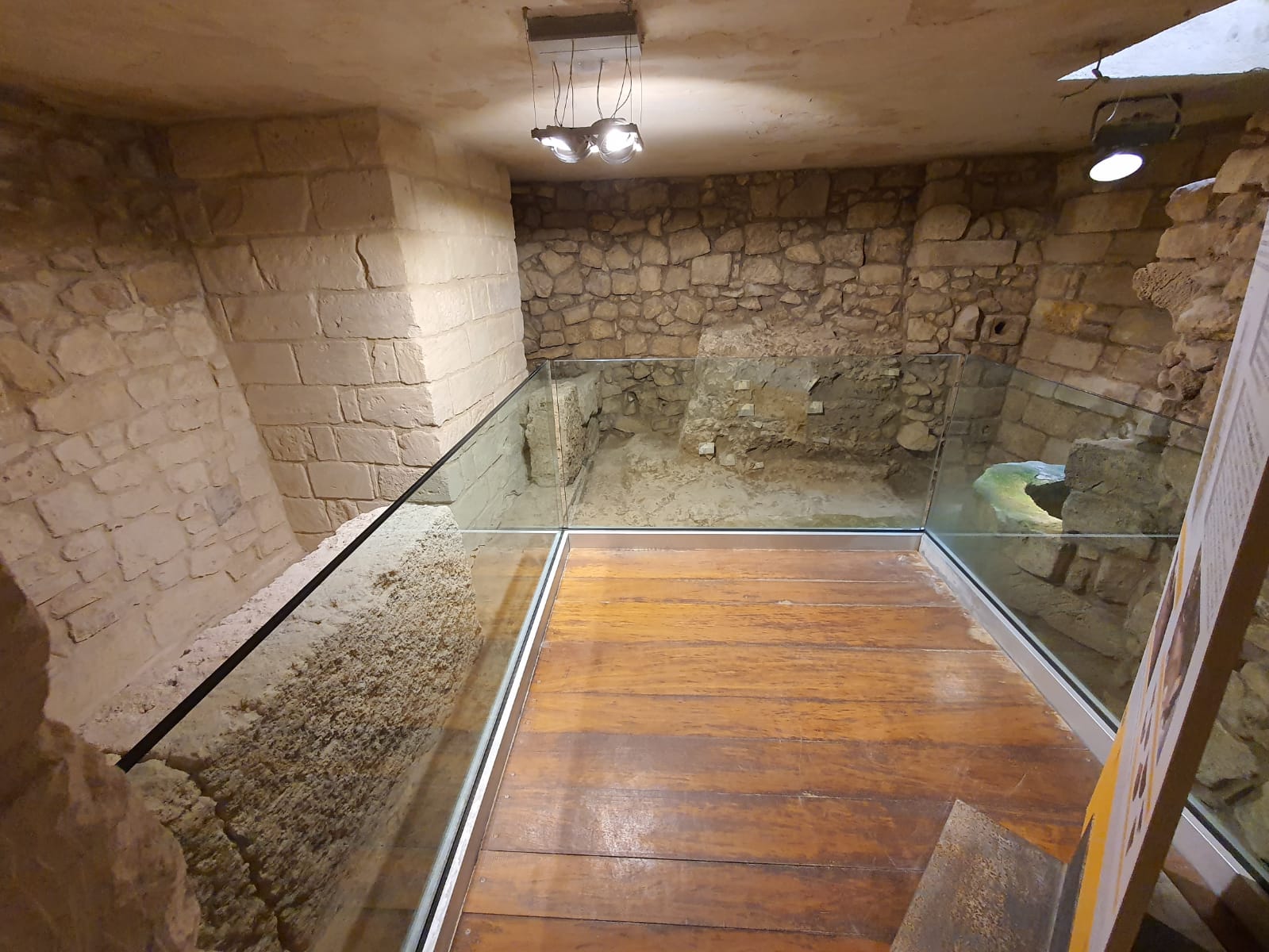 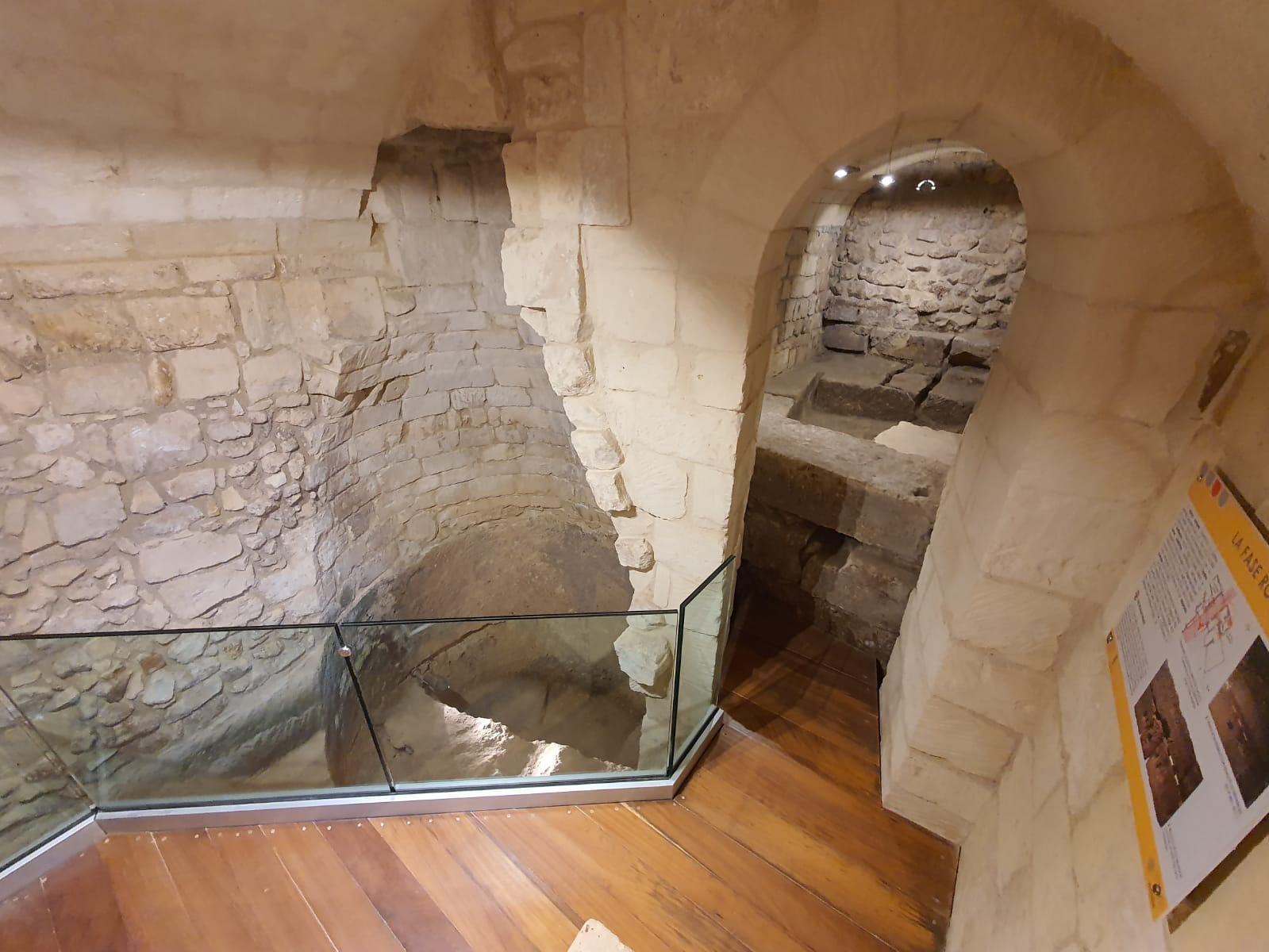 During the restoration work, the archaeologists of the University of Salento, under the direction of Prof. Francesco D’Andria, conducted a series of archaeological investigations in the foundations of Palazzo Vernazza, bringing to light the treasures and important narratives of over two thousand years of its occupation.
The stratigraphic excavations, carried out below the level of the nineteenth-century floor, have revealed the pages of a story that began during the Iron Age (9th – 7th century BC) and consolidated in the fourth – third century. with the Messapi. In particular, in the Roman Age the whole area underwent important periods of urbanisation: the Augustan period (1st century BC – 1st century AD) marks the moment of greatest development of Lecce – then known as Lupiae – with the construction of large public buildings (the theatre amphitheater and public baths), the Sanctuary dedicated to the goddess Isis and the Purgatorium, whose remains were partially brought to light in the underground level, is part of the structure of the urban core of the ancient city.
During the Middle Ages, archaeological excavations then documented the presence of agricultural activities (mid-twelfth to the fourteenth century AD). At the end of this era, the construction of the Torre Signorile (the watchtower) of the Palace and two ancient oil cisterns dug into the rock reveal precious finds which have allowed scholars to reconstruct the daily life of the noble families of Lecce over the centuries. For example, numerous majolica (earthenware) table sets from the 16th and 17th centuries have been found in the cisterns with the patronal coats of arms, ornaments, terracotta statuettes, interesting metal objects linked to domestic life and numerous zoological finds. Particularly relevant among the various precious artifacts – which constitute proof of the cultural interests of the sixteenth-century Lecce nobility and its connections with the courts of Italy – the plaque of Apollo and Marsyas, which reproduces the famous Seal of Nero, from the collection of Lorenzo de ‘Medici.

The temple of Isis and the Purgatorium

The story of the glorious Roman age in stone

As part of the “Underground Lecce” project, archaeologists have unearthed the remains of a Sanctuary dedicated to the Goddess Isis and Serapis (1st century BC – 1st century AD) with the adjoining Purgatorium, the ritual basin in which devotees immersed themselves to obtain a symbolic baptism “with the waters of the Nile” for the purification of the body and spirit, before entering the sacred mysteries.

The discovery is of great importance: in southern Italy there are only two temples dedicated to the Isiac cult – in Pompeii and Benevento – and the presence of this sanctuary had only previously been hypothesised on the basis of some documents that referred to merchants who went to the ancient Lupiae – modern day Lecce – to bring a gift to the oriental divinity, also revered by the Romans after the conquest of Egypt.

In fact, among the various valuable artifacts found during the stratigraphic excavation in the basement of Palazzo Vernazza is a large marble basin with a dedication by the merchant Tito Memmio Cinyps Tiberino – the same as the inscription found in the 19th century in the adjacent Church of San Matteo – which certifies that it was he, this rich Messapian merchant, who built the sanctuary. Among the most important artifacts there is also an oscillum (a votive disc hung between columns) depicting Isis and Anubis, a sistrum (the instrument of Isis, Goddess of fertility, rebirth and the arts), a situla and a statue from the Augustan age depicting Aphrodite, similar to the Egyptian goddess. 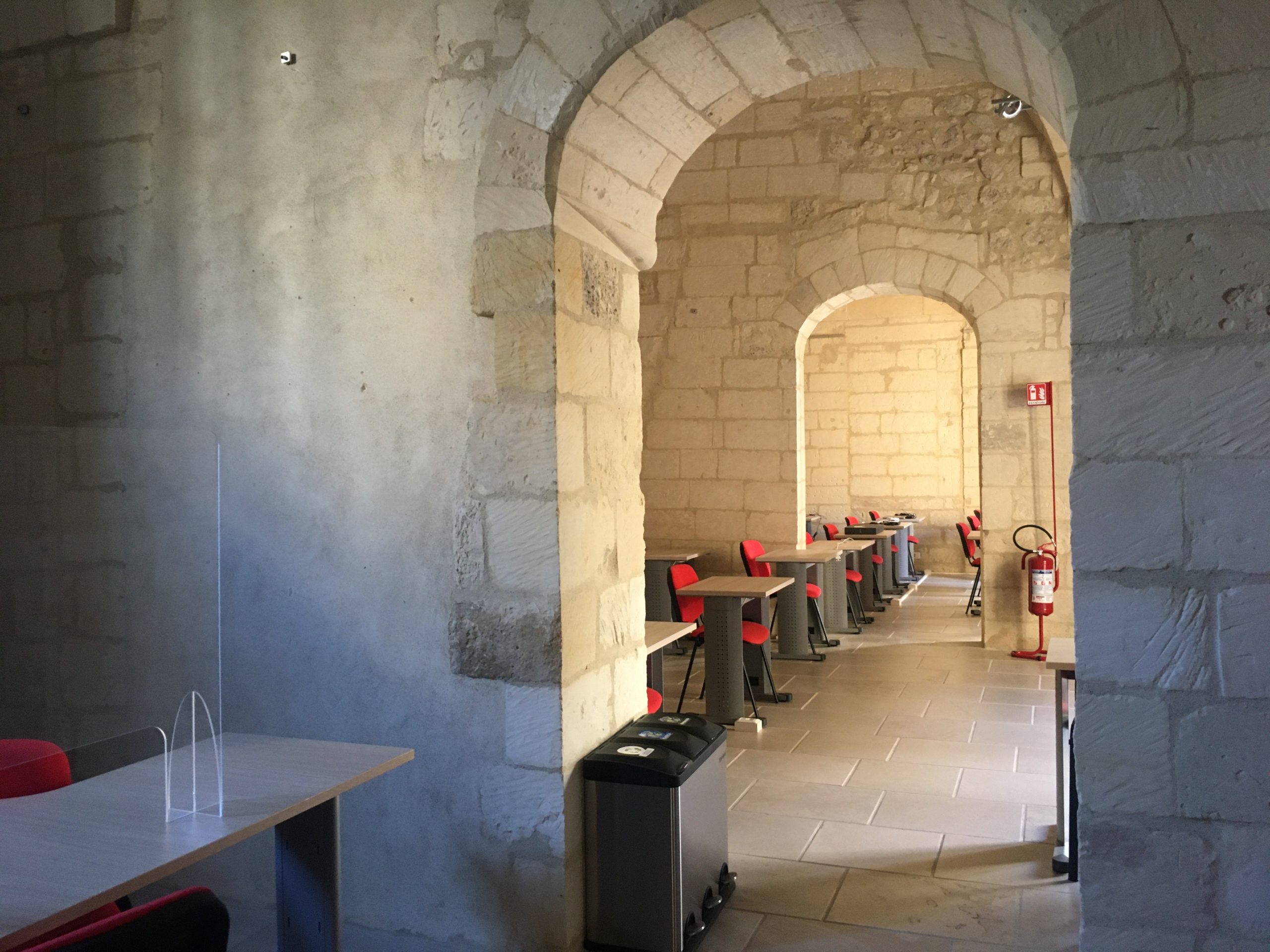 This jewel of Lecce’s Renaissance architecture is finally open to the public and offers an exciting tour to discover breathtaking aspects of history kept in the basement of this noble palace, one of the oldest in Salento.

From the Messapian to the Roman age, from the Renaissance to the Baroque, from the first tour that reveals the archaeological treasures recently brought to light, such as the evocative Sanctuary of Isis.

An unprecedented walk through time to learn about the history of Lecce from a new perspective, thanks to an innovative multimedia exhibition that also offers immersive experiences in virtual reality and insights into augmented reality, with the Phygital Experience Ticket formula.

The preparation of the itinerary, whose scientific input was overseen by Prof. Francesco D’Andria, the archaeologist Caterina Polito and the architect Fabrizio Ghio, was completely designed and built by Mediafarm. 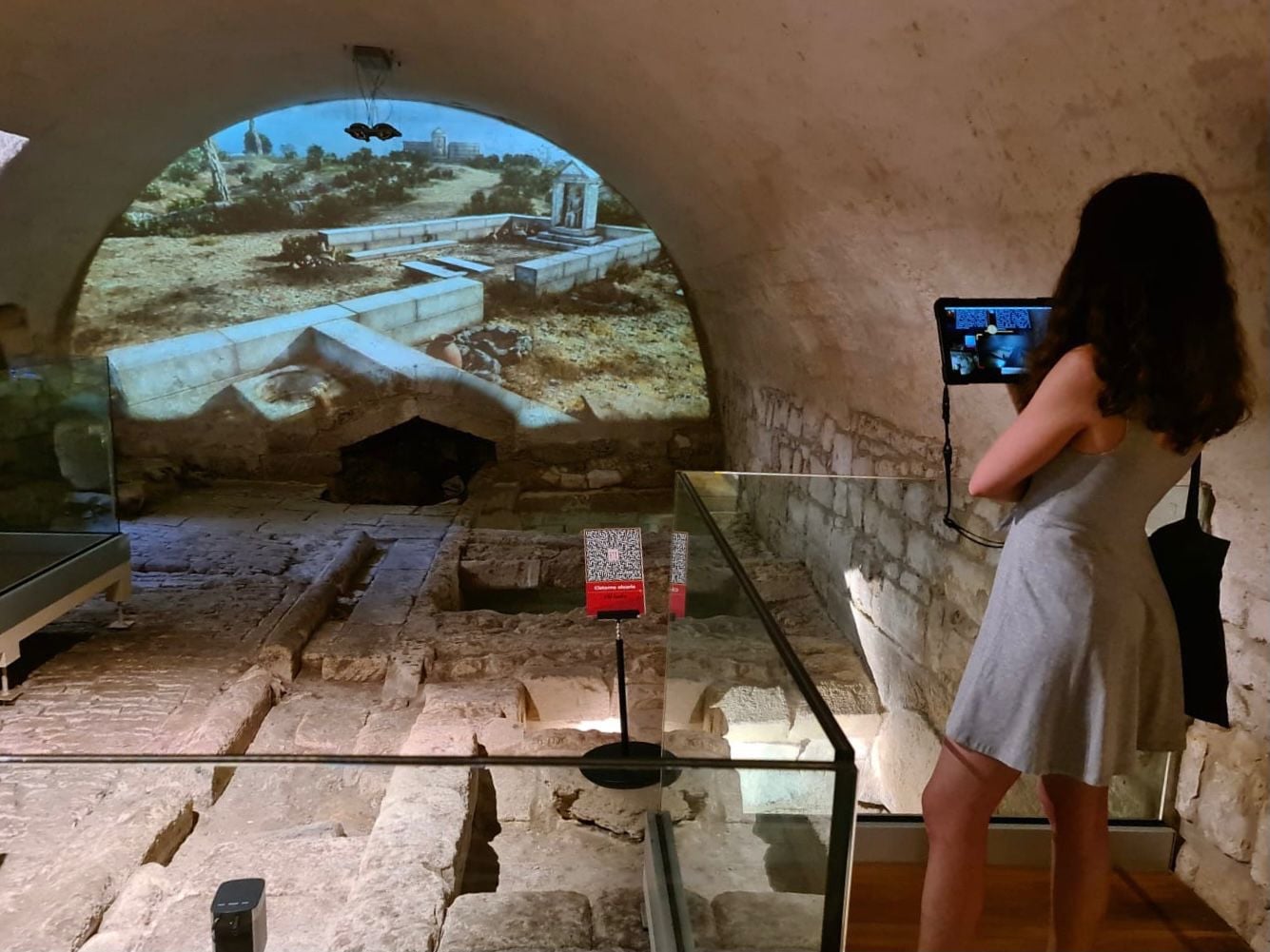 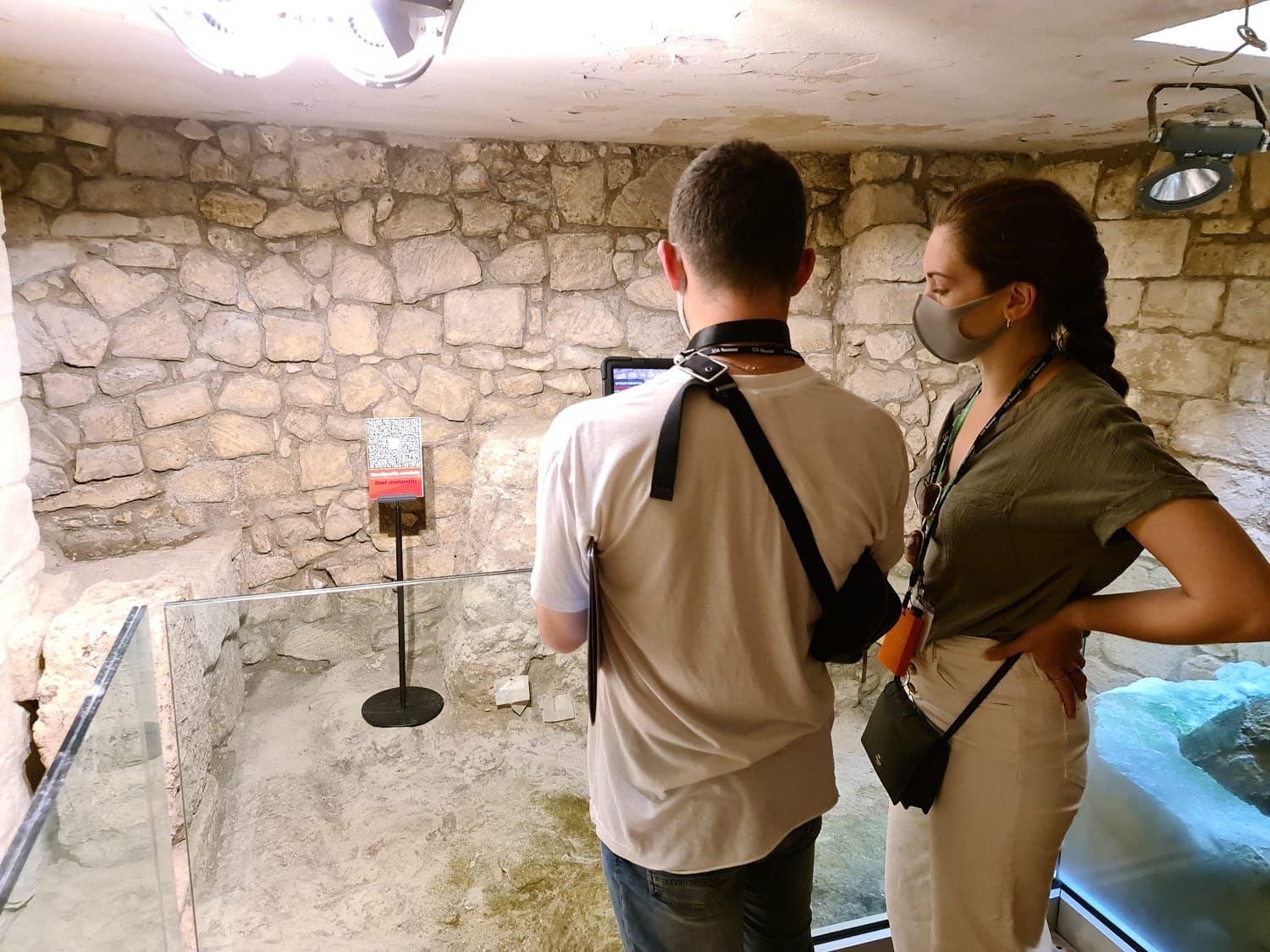 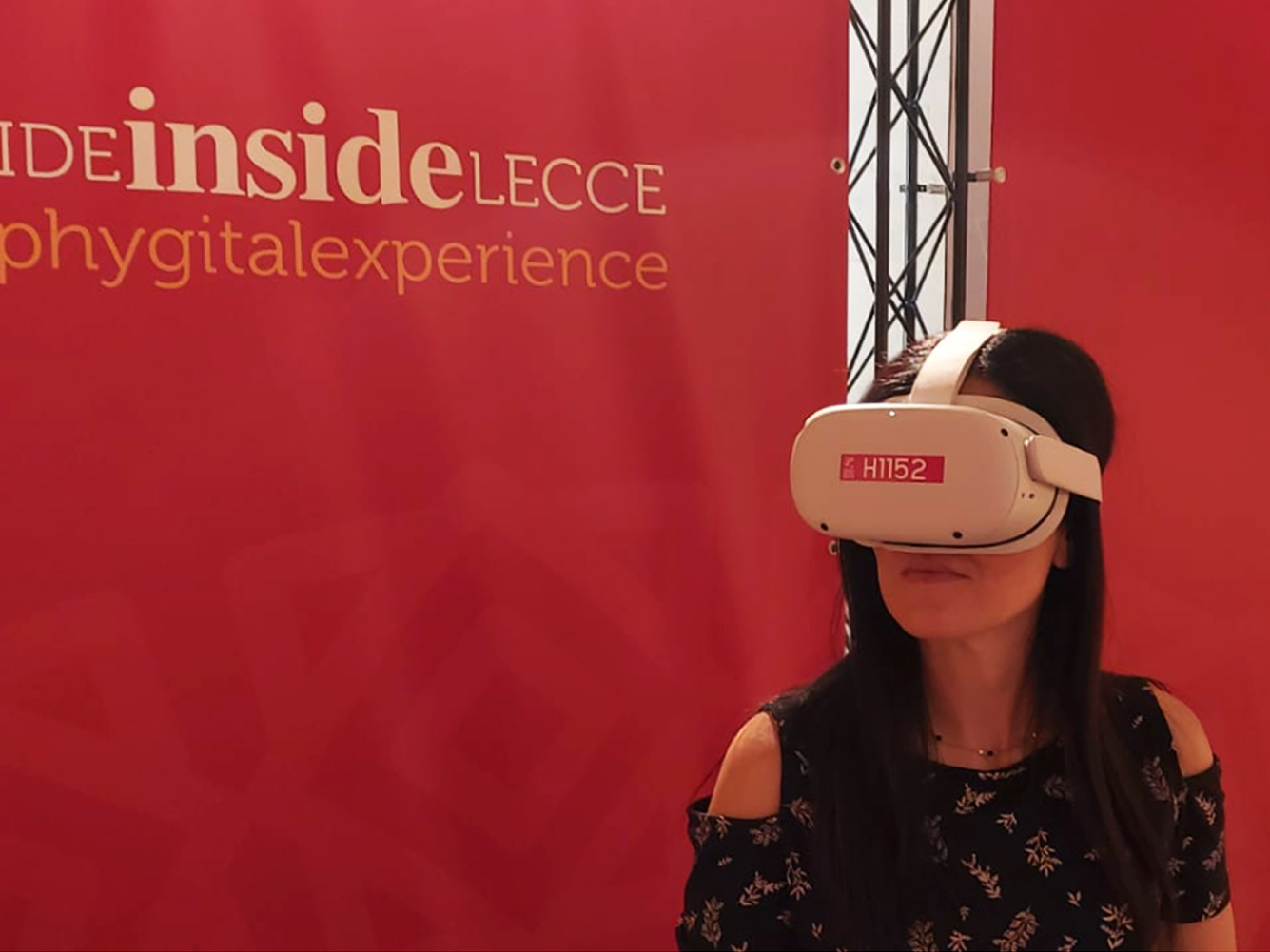 The path of the visit

Sanctuary of Isis and Purgatorium

In the underground level of Palazzo Vernazza, archaeologists of the University of Salento have unearthed extraordinary evidence of the frequentation of this area over the centuries, including the remains of a sanctuary dedicated to the Goddess Isis, from the imperial Roman age, as the cult for the divinity of ancient Egypt had gradually spread throughout the Mediterranean basin.

The Sanctuary stood a short distance from the centre of Roman Lecce, the ancient Lupiae. Scholars have identified here the remains of the portico that surrounded the sanctuary, some statues, various objects – visible here in faithful reconstructions made by skilled Lecce craftsmen – which adorned the temple and the “Purgatorium”, a basin carved into the rock, which symbolically contained the waters coming from the Nile, where the faithful immersed themselves to perform purification rites, typical of this oriental cult.

An unusual “Garden of narrative stones” is the space of the Lapidarum which features a mosaic of stone materials from various periods, whose striking appearance arises from the aggregation of fragments of architectural structures found during the restoration of the building.

In this area, archaeologists have uncovered building parts from the Messapian, Roman and sixteenth-century periods. Of particular interest is the Messapian quarry and the religious enclosure dating back to the 4th – 3rd century BC, the wall structures of Roman-age public buildings, the road axis that ran alongside the sanctuary of Isis and connected it to the centre of Lupiae and the system of oil cisterns, used for the storage of lamp oil, the liquid gold of Salento that from the sixteenth to the nineteenth century was marketed throughout Europe and which brought great wealth to the city, and contrinbuted to the consequent flowering of the splendor of the Baroque.

The Torre Signorile – or Tower Room – whose construction was traced back to the late fifteenth century, is the original nucleus of this fortified house, from which the structure of Palazzo Vernazza-Castromediano developed, one of the oldest in Lecce. Born as the residence of the Castromediano, nobles of German origin at the end of the eighteenth century the building passed to the noble of Genoese origin, Andrea Vernazza Duca di Castrì, hence the name of this splendid palace inhabited over the centuries by aristocratic families.of Salento.

With the purchase of the Phygital Experience Ticket, you can experience a more engaging visit thanks to advanced immersive technological solutions and innovative narrative devices, which truly offer a special touch to your experience here.

An immersive experience in virtual reality with the Oculus headset, to explore the Sanctuary of Isis as protagonists, rebuilt by scholars on the basis of the temple of Pompeii. A fun, interactive learning path that allows you to go deeper into the history of this extraordinary chapter of the glorious Roman era of Lecce, in which the oriental cult for the Great Mother of ancient Egypt also found space.

The entire tour of Palazzo Vernazza allows visitors to be guided in a complete, innovative and truly involving experience through augmented reality. With the tablets provided at the entrance, by framing the QR code of the digital signage, you can view extra information content, insights, 3D reconstructions and videos.

Get in touch with us

For any information leave a message, you will be contacted as soon as possible.